Kafou is terrifying odyssey into the dark underbelly of Haiti’s underworld. Director Bruno Mourral has delivered a twisted little tale of two men, Doc and Zoe, as they are assigned to make a delivery for a company that specialises in kidnapping. Both men are given three rules – Never stop the car. Never open the window. Never open the trunk. Of course all rules are eventually broken. Then the nightmare truly starts.

The major conflict in the film occurs when Zoe discovers that the person in the trunk they were assigned to deliver turns out to be his own uncle. There is an unnerving feeling of dread in the viewer as the film progresses. And, as with all good stories, events unfold and build onto each other until it reaches a fever pitch climax. The film is rife with brutal scenes of intense gore and violence. Mourral pulls no punches. You’re simply left reeling from shock and horror.

The two lead actors play off of each other well. They are moments of humour, horror and humanity that both characters share. It’s always a sign of good filmmaking when the director makes you sympathize with extremely flawed characters. Despite their criminal undertakings, Doc and Zoe earned my sympathy. It seemed as if they were swept up in the ugliness of their world, helpless to the machinations of forces way beyond their control.

Mention has to be made of the cinematography in this film. Most of the movie takes place at night. There is a pervading darkness that literally fills the screen. This leaves the viewer with a feeling of unease, where danger lurks behind every shadow.

Kafou juggles the genres of neo-noir, black comedy and pure horror exceptionally well. The result is a film that haunts you long after you’ve left the theatre. Kafou when translated into English means “intersection”. All horror movie fans need to enter the world of Kafou. A world where nightmares intersect with life. 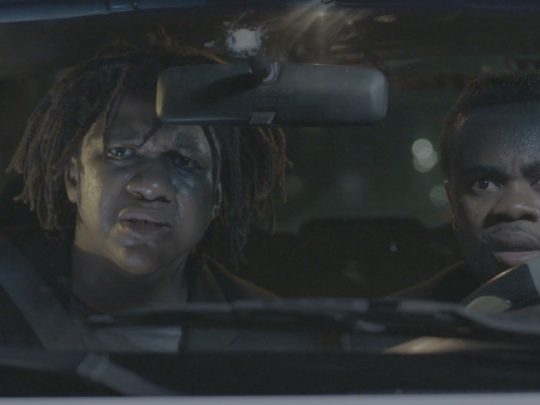