A simple errand for their mother saw Corn and his sister Rita in the middle of a dilemma where they were now running behind time to pay their family’s debts. What would you do if you were going on your merry way and a goat crippled your plans? Yes a GOAT; called Vincent Van Goat no less.

Set in one of Colombia’s San Andres islands the beautiful picturesque landscape shows the island’s beaches and coastal area. It reminds you of our very own Maracas and its winding North Coast road.It’s interesting that this film is set in a Colombian territory but the entire story is conducted in Jamaican English, with English subtitles. The film underlines the notion of the intertwined histories and cultures of the Western Hemisphere. The San Andres islands, where the film is set, has strong historical links to Jamaica, and in fact, these islands are located in the Caribbean Sea closer to Costa Rica than they are to the South American continent.

Be prepared to do some reading with the subtitles if you are not familiar with Jamaican English/Creole. This film is a lot about sibling rivalry. Where the older sister cannot stand the mere sight of her brother but eventually would risk it all for that very said brother just to make him happy.

Bad Lucky Goat captures the story behind the so called curse of the duppy (malevolent spirit) or jinx that has derailed these siblings and their plans. Corn who is an aspiring artist sees himself as someone who is yet to be discovered but his sister clearly doesn’t share his sentiments and she prefers other singers over her brother’s harmonica music, which annoys her sorely. The tumultuous relationship between these two is what carries the film and makes it watchable and engaging.

The accident which claimed the life of the goat and also damaged the front of their father’s truck, is where the journey begins for these two. Although you can clearly see that Corn was the star of the show, Rita’s personality often showed her as the stronger character, bolder and taking risks in order to secure the money they needed to have the truck repaired.

This Caribbean tale is one of adventure, suspense, and even a bit of local myth. The film also gives us a greater appreciation for those who are close to us, especially our siblings. Siblings can all face the same consequences for their actions as the wrath of their mother or father seems to be greater than any duppy, jinx, or bad lucky goat. 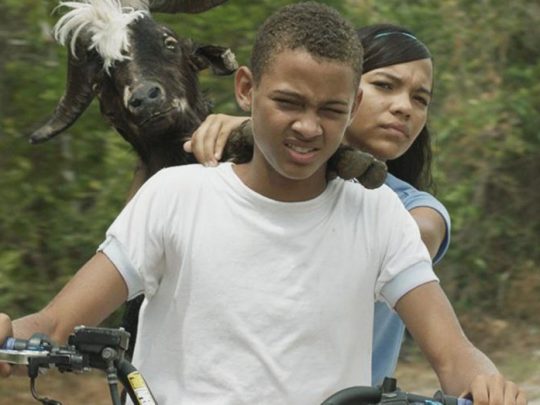