Back to Freeport by Kirk Bhajan

The Danish philosopher, Kierkegaard once said, “Life can only be understood backwards, but it must be lived forwards”. Such a statement is perfectly expressed in the 60 minute film, Back to Freeport, where a man must confront his past in order to move ahead in his life. The plot of the film follows Jamal (played magnificently by Kyle Daniel Hernandez) as he leaves his life in Port of Spain and returns to his childhood home in Freeport.

The first two thirds of Back to Freeport could be considered as one of the most unique survival movies you’ll ever see. There are large stretches of no dialogue as Jamal attempts to make the abandoned house habitable once more. He returns to Freeport as if it were a deserted island, far from the hustle and bustle of city life. He meets a house that has long been dead. Overgrown grass has to be cut. Weather worn walls cry out for a fresh coat of paint. The furniture is broken. The cupboard is bare. At night, candles must be lit as there is no electricity. Jamal’s main goal is to kick start a rusted portable generator much like it was Robinson Crusoe’s goal to start a fire.

We learn a little about Jamal’s neighbours. There’s Narissa (Anna Marie-John), who becomes a source of comfort to Jamal. The major bump in the road to a potential romance is that she’s married. Both actors have amazing chemistry together. You could feel their friendship blossom and the genuine adoration each had for the other. Then there’s the self proclaimed “entrepreneur, developer and community leader”, Rupert Ramlal (played devilishly by Anand Lalkaran). Ramlal serves as a trickster, attempting to snake his way into buying the old house from Jamal.

Back to Freeport is firmly rooted in Naipaulesque sardonic humour. In fact, the book A House for Mr Biswas is prominently featured throughout the film and serves to expound on the themes of self identity, belonging and isolation that Jamal wrestles with. As the film progresses Jamal is plagued by frighteningly real memories of his past as he teeters along the line of sanity.

During the screening for Back to Freeport audience members actively cheered and laughed. When the film reached its sombre ending, there was a hushed silence that filled the theatre. The directing duo of Jian Hennings and Kyle Sahadeo hit their mark in delivering a truly original piece of Trinidadian cinema that will most certainly resonate with audiences nationwide. So get your ticket and take a trip Back to Freeport. 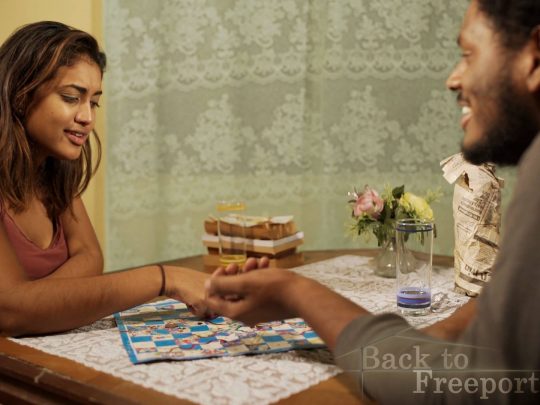