Adama, voiced by Azize Diabaté Abdoulaye, is a French animated film of a 12 year old boy from a secluded village in West Africa. After his brother, Samba (Jack Mba) goes missing, he makes it his responsibility to bring him home safely. Directly defying anyone that stands in his way, Adama goes on the classic hero’s journey, beyond the feared Cliffs, through “the land of breaths,” meeting interesting characters along the way.

The year is 1914, and they are in the midst of the first World War. Don’t worry, prior context is not necessary in order to enjoy this film. The film’s gorgeous animation pulls you out of it for a moment making it challenging to shift your eyes downward to read the subtitles. The animation style can easily be perceived as Adama’s childlike interpretation of the world around him. Establishing shots of his village are bright, picturesque and welcoming. As the film progresses, the lighting is slowly darkened, people turn into mere squiggles and sounds enhance. It also acts as a window to the mindset of Adama as he follows his brother into what is revealed to be no man’s land.

Adama is young and maybe not the smartest of the bunch but you’re rooting for him regardless. Whatever mistakes he makes, you may see them coming from a mile away and yet, you hold on to the edge of your seat and hope that maybe the fallout won’t be too bad. That maybe everyone he meets on his journey is lovely and kind. But alas, the world does not work like that.

For all its luster and charm, the film does not satisfy all of the senses. As the universe that contains this story expands, so does your curiosity. However, that thirst won’t get quenched. Expect to become a little parched when the subplot (for those with no knowledge of WWI) and a certain side character rears its head, and for a moment these appear to be more interesting than the main story. No spoiler here, I promise, but it ends on what can almost be considered a cliffhanger. The hero’s journey is complete but is it really? Realistically? After being taught to fear what is beyond the cliffs that border their village, would acceptance from fellow villagers come freely? Is the ending truly happy or does it reflect the naivety of the protagonist? Putting that aside, for a film with war as a major plot point, the tone still remains hopeful and buoyant. The film’s fast pace, sympathetic characters and amazing animation earns it a spot on the re-watch list, despite its minor flaws. 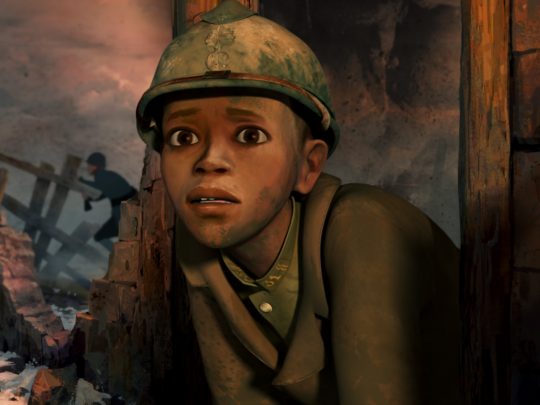