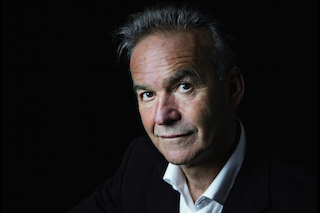 Among acclaimed documentarian Nick Broomfield’s many films are Aileen: Life and Death of a Serial Killer (1992), Kurt and Courtney (1998), Biggie and Tupac (2002), and Sarah Palin: You Betcha! (2011). Tales of the Grim Sleeper (2014), is his most recent film. Originally from the United Kingdom, he currently lives in Los Angeles.