It was announced today that the Nigerian drama Half of a Yellow Sun starring Bafta award-winner Thandie Newton (Mission: Impossible II, The Pursuit of Happyness, Crash) and three-time Golden Globe nominee Chiwetel Ejiofor (Children of Men, American Gangster, Salt), has been selected as the opening film of the 2013 trinidad+tobago film festival (ttff), which takes place September 17th – October 1st.

The screening at ttff (now in its 8th year) will serve as the Caribbean premiere and mark just the second time audiences are able to see Half of a Yellow Sun, following its world premiere at the Toronto International Film Festival just a few weeks prior.

Half of a Yellow Sun is an adaptation of celebrated Nigerian author Chimamanda Ngozi Adichie’s best-selling novel of the same title, which won the Orange Broadbrand Prize for Fiction.

Set in 1960s Nigeria, the story brings audiences into a country torn apart by civil war and shows how the interwoven lives of four central characters intersect during a struggle to establish the independent republic of Biafra.

Directed by acclaimed Nigerian playwright Biyi Bandele, Half of a Yellow Sun is a product of “Nollywood” — the moniker bestowed on Nigeria’s booming film industry that produces over 2,000 movies a year and has become the third most valuable movie industry in the world behind only Hollywood and Bollywood.

Produced by Bafta award-winner Andrea Calderwood (The Last King of Scotland) and Gail Egan (The Constant Gardner), the film is a British/Nigerian co-production and was shot at Tinapa Film Studio in Nigeria and in the United Kingdom.

“It’s a real honour to have Half of a Yellow Sun invited to be the opening night film of the trinidad+ tobago film festival,” said Calderwood, who will attend the opening. “The Festival has always been a great supporter of this project, and as a groundbreaking film from top Nigerian talent telling this epic story on an international scale, this is the perfect way to introduce it to audiences in the Caribbean as we take the film out to the world.”

“We are proud that Half of a Yellow Sun will open the Festival,” added Bruce Paddington, Founder and Festival Director, ttff. “This continues our mandate to not only show films from the Caribbean and the diaspora but to also celebrate films made in Africa, one of our heritage regions.”

Opening night events for the ttff/13 will take place on the evening of Tuesday, September 17th at Queen’s Hall. The Festival will run through Tuesday, October 1st.

Additional announcements pertaining to the opening night and the rest of the Festival, including the full lineup of films, will be made in the coming weeks.

Award-winning Argentinian writer, director and producer Julia Solomonoff will be the lead facilitator for the RBC Focus: Filmmakers’ Immersion, to be held at the ttff/13.

Solomonoff is the writer and director of The Last Summer of la Boyita (2009), which was co-produced by Pedro Almodóvar’s El Deseo SA and won over twenty international awards including best film, best director and best screenplay. Her directorial debut, Sisters (2005), opened at the Toronto International Film Festival (TIFF), while her original script for the film was developed at the Sundance Writers’ Lab.

As a producer, her credits include Julia Murat’s Historias que existem quando lembradas (ttff/12), and Everybody’s Got a Plan, (associate producer), directed by Ana Piterbarg and staring Viggo Mortensen, which premiered at TIFF 2012.

A Fulbright Scholar, Solomonoff teaches Film Directing at Columbia University School of the Arts, from which she graduated with an MFA in Film in 2000. She has also taught directing workshops at FUNAVE (Cervantes Institute), NYFA/Femis, France NYFA/Cambridge, UK, CIC, Cievyc and Facultad Libre (Argentina).

Now in its third year, RBC Focus: Filmmakers’ Immersion is an intensive development programme for ten selected emerging filmmakers from the Caribbean and its diaspora. Each filmmaker enters the programme with a concept for a feature-length film, from which they will be expected to develop a detailed treatment. This year, the spotlight is on narrative filmmaking.

At the end of Focus, the top five participants as decided by the facilitators will be chosen. These five participants will be given an opportunity during the ttff/13 to pitch their project to a jury at a public event. The participant with the best project and pitch, as determined by the jury, will win a cash prize of TT$20,000.

Focus takes place from 24–27 September. The ttff, now in its eighth year, runs from 17 September–01 October.

The trinidad+tobago film festival (ttff) is an annual event that requires the support of the working team, sponsors, partners, media, friends and—of course—our audiences, to make it a success.

This is why the Festival is pleased to announce that for the ttff/13 we have some new, exciting partnerships.

The Hyatt Regency Trinidad is the premiere hotel and conference centre in Trinidad and Tobago, and for 2013, will be the official hotel partner of the ttff. Festival guests will experience top service and comfort at the Hyatt; this will also be the venue for several Festival events, our secretariat and our press room.

Guardian Media Limited (GML) has a broad audience reach, spanning newspapers, radio stations, CNC 3 television station, associated websites and social media channels. We are proud to announce that GML will be the official ttff/13 media partner, giving the Festival the opportunity to reach new and more diverse audiences. Look out for daily screening schedules in the Trinidad Guardian during the Festival, exciting interviews and feature stories, radio promotions and giveaways.

Drink Lounge and Bistro has been a supporter of the ttff for the last couple of years. Since expanding to a full-service restaurant, rebranding and re-opening its doors in May 2013, Drink has quickly regained its status as a premiere space for liming and dining. The ttff is happy to announce that as a venue partner, Drink Lounge and Bistro will be the location for our Filmmakers’ Lounge, a nightly social networking event for the Festival’s visiting and local guests.

The National Lotteries Control Board (NLCB) has been a constant supporter of the ttff for the last several years as an Award Sponsor. We are exciting to welcome the NLCB as an official Supporting Sponsor of ttff/13.

As the ttff continues to develop and evolve, we count on the support of our existing partners—Flow, RBC Royal Bank, bpTT, the Trinidad and Tobago Film Company and NGC—as well as our new partners, to make our vision a successful reality.

Carmen and Geoffrey to Screen at ttff Offices

The documentary Carmen and Geoffrey (2005, 80′), a portrait of dancers Carmen de Lavallade and her husband Geoffrey Holder, will screen on July 24 at the offices of the ttff at 199 Belmont Circular Road in Port-of-Spain.

Filmed over three years in New York, Texas, Paris and Holder’s native Trinidad and Tobago, Carmen and Geoffrey is an affectionate portrait of two (literally) towering icons of dance, who met and wed in 1954. Ever since, they have been celebrated dancers, actors, choreographers and much, much more, together and individually. The film combines archive footage with candid interviews with de Lavallade and Holder, as well as friends and acquaintances, to provide a emarkable glimpse into the lives of an extraordinary couple.

Directed by Linda Atkinson and Nick Doob, Carmen and Geoffrey won the Jury Prize for Best Film at the ttff/09.

The screening will begin at 7pm and is free of charge. There will be a preceding short, Tickle Me Rich, a ttff/12 selection directed by Sonja Dumas.

Image: A still from Carmen and Geoffrey 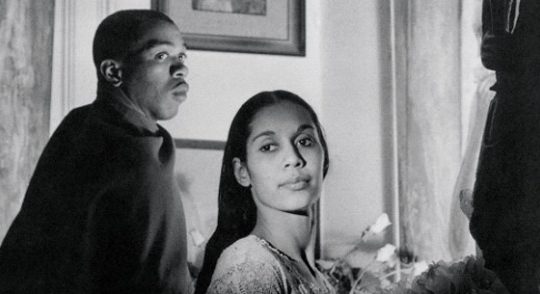